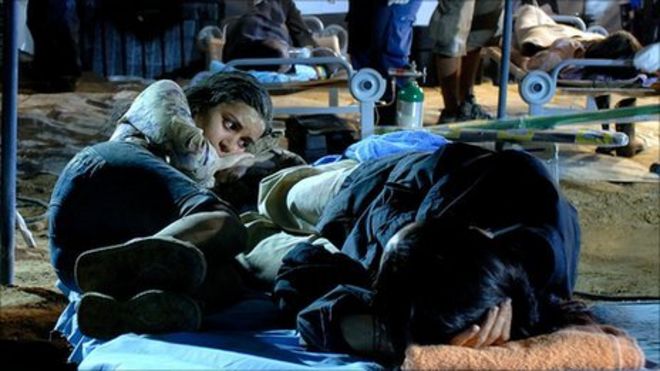 «I haven’t been back to Vargas since,» says Johnny Gavlovski, a Caracas-based psychologist.

«It hasn’t been dealt with… it’s stayed in many people’s memories and there’s nothing better than art for coming to terms with the collective memory,» Mr Gavlovski says.

«It’s completely logical and necessary that the most important natural disaster in the country’s history would be a theme we should talk about,» says Alejandro Bellame, director of El Rumor de las Piedras (The Rumble of the Stones).

«I think enough time has passed that has allowed us first to live the tragedy, second to mature and to grieve and then the moment comes to reflect on what happened afterwards.»

«The journey allows these two women to find out who they really are, and I think a tragedy of this magnitude obliges us to think about who we are,» says Spano.

«It’s saying to the viewer… that a whole life full of money and material possessions can be buried by the mud but what stays with us is our capacity for tolerance and our ability to relate to each other.»

«This is not about a natural disaster. This is about what transformed a society, and that happened in Vargas,» says Ugas.

«[The elections] turned the country into two different camps and for some it began a new era of socialism and for others it was like a tragedy,» Ugas explains.

«The film invites people to reflect on the last 10 years.»